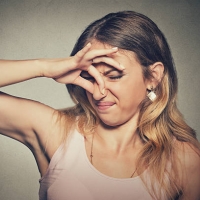 Tricks to Banish Bad Smells From Your Home—Forever

Even if your house looks immaculate, there are few things that will exterminate (with extreme prejudice) any kind of positive first impression than an off-putting smell. Whether it's eau de cat, last night's attempt at Nepalese cuisine, or just an overall mustiness, bad odors are bad news—especially if you're trying to sell your home. After all, as Debra Johnson, a home cleaning specialist with Merry Maids, points out, “If you enter a home and immediately encounter a smell, that is generally all people focus on, and all they will remember.”

Banishing bad odors, however, isn’t as easy as dusting toe kicks. Certain scents are hard to remove—the more so when you're so used to them, you become “nose blind” and don't even notice. So for starters, you may have to ask people you trust (or your Realtor®, if you're selling) to tell you honestly whether they're picking up a whiff of anything weird. And if the answer is yes, we've got some tips and techniques for you.

The odor of cat urine, in particular, is so obnoxious and persistent that people have actually sued former homeowners for not disclosing it. The odor might be successfully masked during showings, but reemerge once the new owners move in.

Luckily, there are sprays with enzymes that break down odor molecules to remove the stench. The trick is to soak the spot with the enzyme spray, letting it seep down into carpet pads and floors.

If that doesn’t work, you may have to pitch the rug or replace a section of flooring, but not necessarily the whole thing. Cats and dogs are creatures of habit when it comes to doing their business, so replacing just that area may do the trick.

Open windows and set the range hood fan on high while you’re cooking fish or other pungent items, then clean pans and utensils immediately. If odors still linger after dinner, set a shallow bowl filled with white vinegar or coffee grounds on the counter to absorb smells overnight. Another tip: Close bedroom and closet doors before cooking fish so clothes and linens don’t absorb the smell.

A cut onion can neutralize paint smells that can otherwise make your house reek for days. Before painting, peel a large onion and slice it in half. Place each half on a dish and position them in opposite ends of the room. After the onions absorb the paint fumes, wrap and toss. And don't worry; the smell of the onion won't linger for more than an hour, tops.

Even after you’ve pitched out the garbage, those cans hold traces of trash. The best way to banish the smell is to wash out the can. Then, make an odor-eating sachet: Place some coffee grounds, a couple of tablespoons of baking soda, and a few cloves in the center of a coffee filter. Close with a rubber band or twist tie, then place in the bottom of the can, beneath a clean trash bag.

Whatever's in the kitchen sink

Whenever you smell a foul odor near your sink, check your drain and garbage disposal, where rotting meat or produce can become stuck and create a major stink. To deodorize the grinder, place two or three slices of lemon or orange in the disposal, turn on the water, and flick on the switch. More things you can grind to remove disposal odors include ice combined with rock salt, white vinegar, or good ol’ mouthwash.

If your home smells musty, you may have a mold problem that only a professional can wipe out safely. To prevent mold, the trick is to control your home’s humidity so that mold spores don’t have a chance to multiply.

“By keeping a home’s indoor humidity to a range of 30% to 60%, homeowners can discourage mold and mildew,” says Ryan McLaughlin, a project manager at 1-800-WATER-DAMAGE. You can purchase a hygrometer, which reads the moisture level in the air, for about $10. If it reaches a mold-friendly level, try the following techniques to dry indoor air.